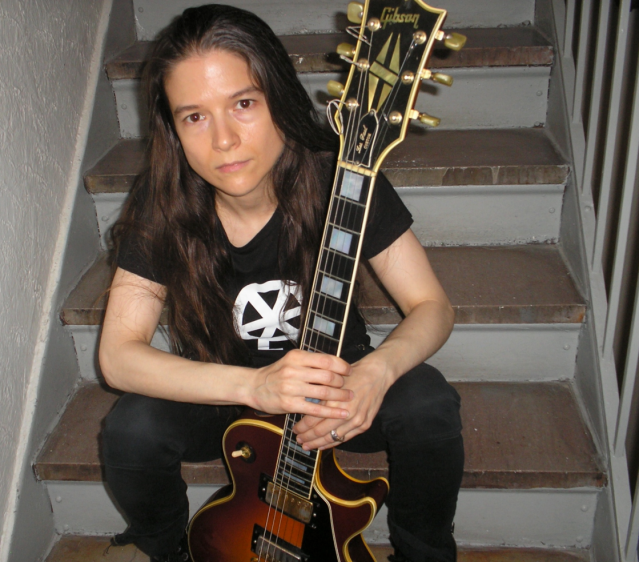 Bloor’s  track and record offer a unique, cunningly fresh and aggressive take on guitar- forward experimental / avant-garde metal.  The track hits you  like a wall of  heavy, thick, churning out of control metal machine coming back to life to shred it’s  builder to shards of their former self. Her guitar tone is thick, present,  a tonal and gritty; attacking the inner ear from every sonic approach. “Hilarity Ensues” is aggressive, present and ready to destroy, laughing in the listeners face as a sonic assault envelops their last hope and prayer. Check the  track below and pick up her new disc.

“Reg has been performing as a solo artist since 2014, including at The Red Bull Music Academy New York Festival 2014; at the OFF Festival in 2014, as well as sharing bills with such artists as Stephen Omalley, Krallice and GNAW. She released her debut solo album “Theme from an Imaginary Slasher” in 2015. She was named by Brad Cohan of the New York Observer one of the 15 Best Metal Bands in NYC. Animated shorts she has created featuring her music and original artwork will be featured on The BJ Rubin Show on MNN in 2017.

Reg emerged from the Neo-No Wave scene of the 1990s with the Boston-based band TWITCHER who released on CD “Leg of Lamb of God”. They performing all over the Northeastern United States on bills with such bands as Melt Banana, Arab On Radar and The Flying Luttenbachers, as well as appearing on the soundtrack to the TROMA film “TERROR FIRMER” directed by the legendary Lloyd Kaufman.

She moved to NYC in 1999 and began working with legendary avant garde composer Glenn Branca (to whom she is married) since 2000, performing all over the world in his Symphony No. 12, as concertmaster for his “Symphony No. 13 (Hallucination City)” for 100 Guitars, recently released on CD by Atavistic Records and “Symphony No. 15 (Running Through The World Like An Open Razor)”(Music for Strange Orchestra), “Symphony No. 16 (Orgasm)” for 100 Guitars and as part of Branca/Bloor the Glenn Branca Trio. She also appeared as part of the Glenn Branca Ensemble on his CD “The Ascension: The Sequel” and on the soon to be release “The Third Ascension” and susequen tours. In May of 2016 she participated in a performance of Branca‘s Symphonies 8, 10 and 12 with an all-star ensemble as part of the Red Bull Music Academy New York Festival 2016.”