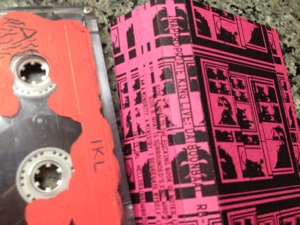 Inappropriate King Live is another project of Rainbow Bridge founder Justin Marc Lloyd. This sixty minute cassette with xeroxed art and a slab of paint on the shells subtly boasts IKL etched into the off red paint, starts out with a hybrid melodic cacophony of pleasurable tones which seems to start to decay into a blended swelling swirling rainbow of distorted fuzz transmissions , swiftly shifting from musical “tones” to collage to straight up oscillator tinkering. JML crafts a subtle yet enigmatic blend of electronic sounds though a barrage of tools and weapons of sound at his fingertips; a woman’s voice breaks through the transmission and asked a question?  Then, piercingly high-pitched delayed feedback loops obliterate her intention and the listener is dropped on their head once again ; with a large dark swell of negativity, an endless tunnel of reverberated shaking sound. Aesthetically, IKL takes the kitchen sink approach to electronics with a wide array of sound sources creating harsh, raw, and at times primitive motifs on manipulated and distorted “blown out to the max” sounds, creating a crafty and luscious array of electronic torture. For good dynamic exploration Lloyd uses the occasional throbbing bass beats as a turncoat to break through the chaos and point the listener in a new direction, but the background sounds of failed transmissions never totally vanish . The tape begins to swell up to a crescendo again and almost instantly the listener is deported into a dark techno hell with a throbbing bass be in chirping send the blue blush overtones back to be entitled listener out of noise and onto the dance floor without losing its edge. The beat slowly is muddied and this ship of sonic chaos begins to sink – the beat however is hypnotically throbbing underwater- Tangerine Dream is all of The sudden playing on a micro cassette player being flushed down a european toilet Shimmering synth chords and strikes decay out as the beat drops out for good. A stunning stylistic jump for just one side of this tape.

The second Side is more of the same nomadic structure, or lack thereof , sounds swelling of cacophony , nervousness , and ebbing back to calm “field” recordings that burp a low din , and then crescendo into towering noise blasts, throbbing broken beats, screeching synths, and mangled vocals gelling to the sound that is Justin Mark Lloyd’s Inappropriate King Live project , will be looking forward to more from this interesting glued and screwed outfit.