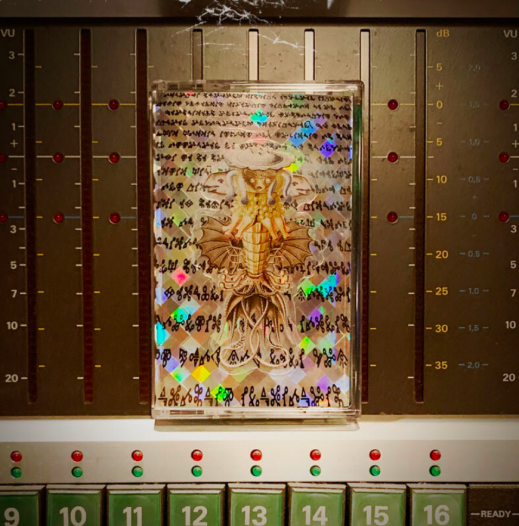 Bran(…)Pos‘ new album “Cosmic Mushmouth” may be the most complete overview of Jake Rodriguez’s multi-faceted soundscape composition to date. With his signature vocal-triggered electronics buried under layers of modular and effects, “Space Gelt” seems closest to a lot of the recent live performances I’ve had the pleasure of witnessing Jake do. I first saw Bran(…)Pos in the late 1990s in SF and seeing how different each
performance could be and the many concepts that Jake has tried over the years has made him a favorite of mine and many in the Bay Area. It’s great to see him team up with Tyler Harwood (who produced this for his label (Planetary Magnetics) and did the artwork) who you may have seen perform as Anti-Ear or together with Rodriguez as ‘Beandip Troubadours,’ fully engaging both of their hilarious stage performance skills.

The crowning tracks here are the 20+ minute composition “RxR (rocket crossing)” which slowly builds into a stuttering modular synth rhythm with some of Bran’s trademark acoustic tympani playing. The final track “Martian Brine Pool” features an amplified cello;  another instrument that Bran has used off and on and in many configurations over the years.

Rodriguez is now heavily entrenched in the Bay Area theater scene, doing sound and composition. It will be exciting to see what lies ahead for this polymath and true SF original. Albums and acts like this that make me excited to be living and working still in SF. Come aboard!     – Derek Gedalecia